There is a lot of ivy around here, and we are determined to remove it all.

Well, we may both be determined to remove it, but Andy is the one who has been taking action on the issue. In the last week or so, Andy has been removing the ivy from around the fence that surrounds the “yard”, one section at a time. 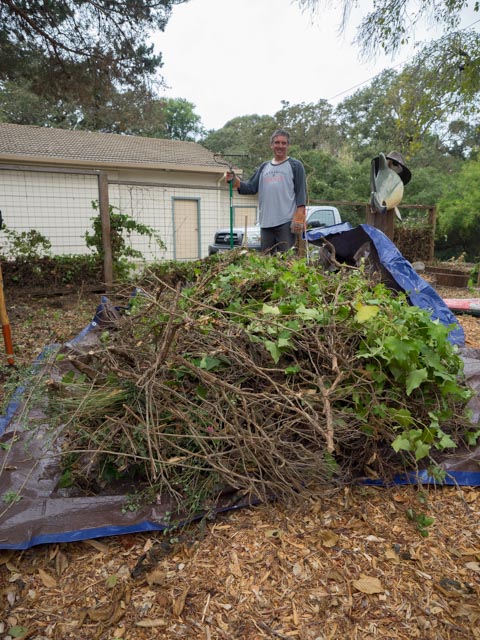 The quantity of ivy that has been removed is beyond what we’re prepared to compost, at least for now, so Andy brought it to the county recycling yard/transfer center (where it will still be composted). Since they weigh the load, it turns out that Andy removed 220 pounds of ivy! That is a lot of ivy.

I give Andy points for wrangling so much ivy, and remaining undaunted by the fact that there’s so much more ivy that still needs to be removed.

Next up, I want to introduce you to Charlie the spider:

Charlie lives under the eave at the end of the covered porch.  Charlie is a female “cross orbweaver” spider, also known simply as a “garden spider” and you can read more about her kind here.  But t in case you don’t, this is the best part:

I think I need a little more information about this “European Spider of the Year” election. It is a real thing held by the “European Society of Arachnology” and you can learn a lot about spiders on their website, including that the 2010 election included “78 jury members from 21 countries”, but nothing about the actual criteria, nomination process, or politics involved.

Anyway, Charlie has been my favorite spider at the ranch…well, favorite might be a strong word – it might be more accurate to say that she has been the “most tolerable spider who minds her own business and stays reliably in or near her web”.

And the reason I’m featuring Charlie on the blog today is that she caught a yellow jacket!  Charlie is the Spider Hero of the Week! 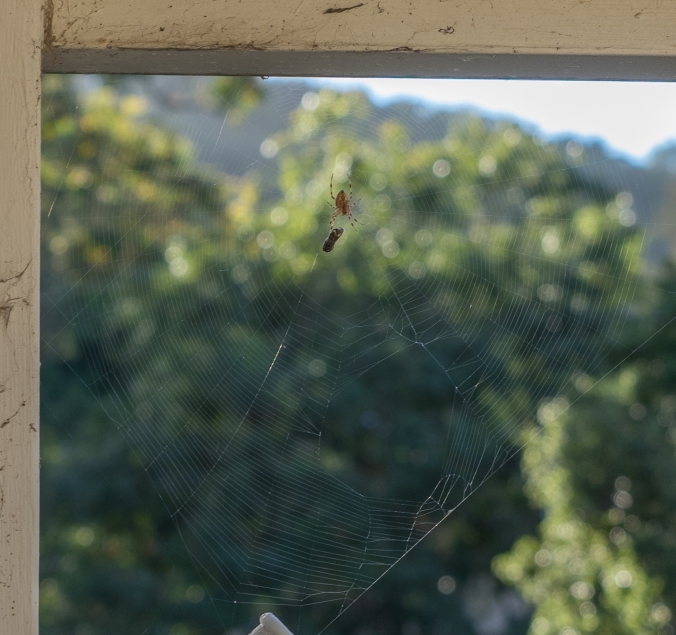 It’s a little hard to see, but the black blob below Charlie is a mummified yellow jacket.  If you click on the photo and then click again you can see it close up.  Also, note the giant hole in her web midway down on the right, where we assume the wasp was initially trapped in the web.

By the next day, the mummified wasp was gone and she was in her hang-out spot up at the top of the eave (where she is when she’s not in her web), and she had repaired the hole:

I give Charlie points for being the Spider Hero of the Week, and for staying on top of her web repairs. No deferred maintenance here!

In closing, here is a picture I took outside the night before the big super moon eclipse event. 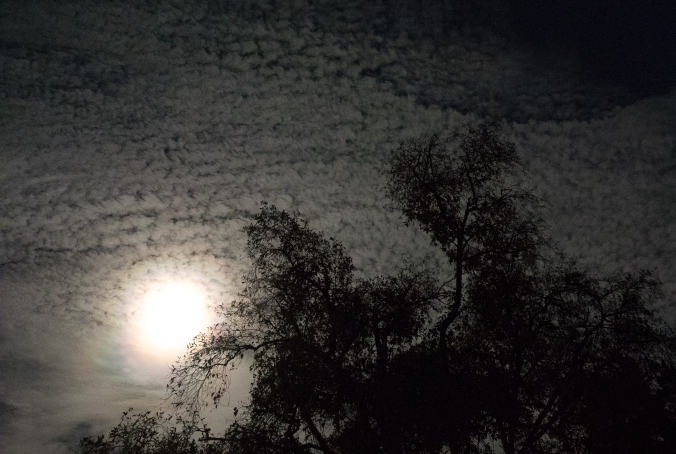 One thought on “220 Pounds of Ivy, and Charlie catches a Wasp”